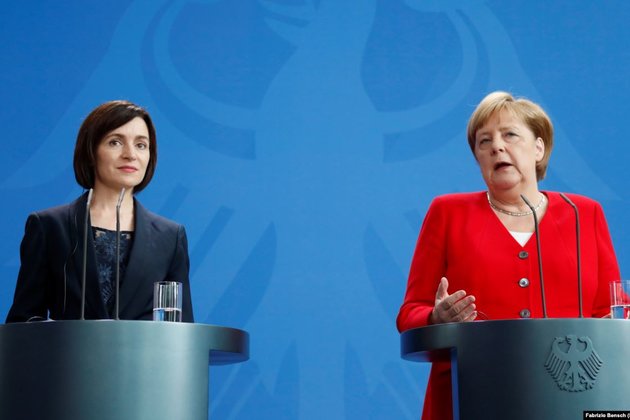 German Chancellor Angela Merkel has urged Moldova's new pro-European government to continue on the path of reforms and step up the fight against widespread corruption, saying Berlin would offer Chisinau its support.

'The European Commission has made clear that it would help Moldova on this path, and Germany will do the same thing wholeheartedly,' Merkel said on July 16 at a news conference in Berlin with Moldovan Prime Minister Maia Sandu.

Sandu thanked Merkel for the support extended to Moldova.

Earlier, Merkel again sat through national anthems at a military honors ceremony together with Sandu after three recent shaking spells sparked concern about her health.

Chairs were set up for Merkel and Sandu outside the German Chancellery -- an unusual arrangement first put in place when Denmark's new prime minister visited on July 11, the day after the last of Merkel's shaking episodes. Merkel showed no signs of unsteadiness.

Merkel, who will turn 65 on July 17, last week suggested that the psychological impact of the first shaking episode in mid-June was responsible for the subsequent incidents.

She has kept up a full public schedule.

With reporting by AP, AFP, and Thelocal.de

PARIS, May 26 (Xinhua) - French President Emmanuel Macron on Tuesday vowed to massively back the auto sector to help ...

Tensions between Beijing and Washington add to world's Covid-19 woes

BEIJING, China - China said on Sunday that its relations with the United States were "on the brink of a ...

CANBERRA, Australia - Australian Federal Police said Wednesday they were dropping an investigation of a prominent journalist who obtained classified ...

Obamagate is the latest conspiracy theory to be pushed by U.S. president, Donald Trump. It started on the morning of ...