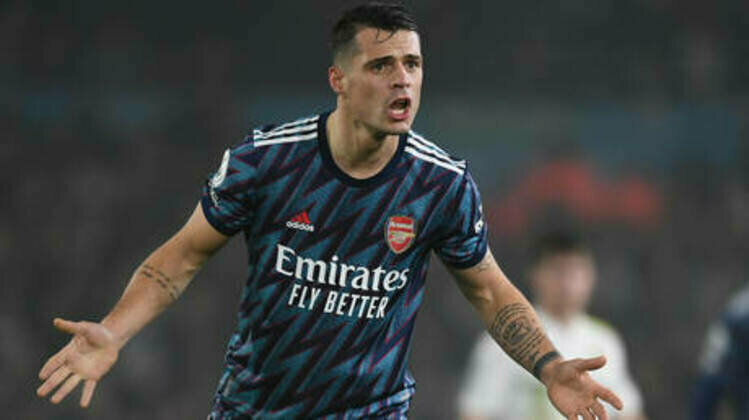 Investigators probing a yellow card that Granit Xhaka received for Arsenal against Leeds United last season are also looking into an alleged criminal conspiracy which involves a former professional already convicted of match-fixing and the Albanian mafia.

The English Football Association (FA) launched an inquiry after being made aware of suspicious betting patterns towards the close of Arsenal's 3-1 win over the Yorkshiremen at Elland Road.

On 86 minutes, Xhaka went in referee Andre Marriner's book for timewasting before taking a free kick, despite Arsenal having a comfortable lead.

Xhaka took around between 10 and 15 seconds standing over the ball, and the Daily Mail revealed in June how the inquiry had been passed on to the UK's National Crime Agency (NCA).

On Friday, the same British paper says NCA investigators told them they have discovered evidence of large sums of cryptocurrency wagered in markets not regulated in the UK, with much of the activity coming from Albania where Swiss-born Xhaka can trace his roots.

Even so, there is no suggestion that Xhaka, who was reprimanded by FIFA at the World Cup in Russia in 2018 for making a hand gesture representing the Albanian eagle when Switzerland beat Serbia 2-1, has done anything wrong.

Furthermore, it is also unclear who might be implicated as part of any alleged conspiracy.

Simultaneously, however, the NCA are looking into allegations that Swedish-Albanian striker Alban Jusufi, who was slapped with a five-year ban by Swedish courts for match-fixing in 2017, made huge amounts of money by betting on Xhaka being booked.

Jusufi, now 41, was found guilty of bribing AIK shotstopper Kyriakos Stamatopoulos Pound 150,000 ($182,000) to play badly ahead of a derby meeting against IFK Gothenburg, which caused Sweden's FA to postpone the fixture after the planned match-fixing was reported.

To this backdrop of controversy, Xhaka is expected to run out for Arsenal on Friday night as they get their 2022/2023 Premier League campaign underway on the road at Crystal Palace.

Coming close to leaving the club after a dispute with their fans which saw him appear to tell them to "f*ck off" in a 2-2 draw against Palace in October 201, Xhaka was stripped of the captain's armband by then-manager Unai Emery but seems to be enjoying life in north London again under the Spaniard's successor Mikel Arteta.

"Without him [Arteta], I would not be here in this football club anymore," Xhaka recently confessed.

"He helped me a lot when I was completely down. He took me aside, helped me with small things, step by step, tactically, as a person, mentality, between the team and the club, tried to help me as well with the fans.

"He is a freak in a positive way," Xhaka went on. "Tactically, he knows everything. How he prepares the team before training, before the games, is unbelievable. I had a lot of coaches, but I have to put Mikel as one of the top ones in my career."

Now that fences have been mended, a decent challenge to Manchester City's Premier League title remains top priority for the pair in addition to sealing qualification to next term's Champions League.