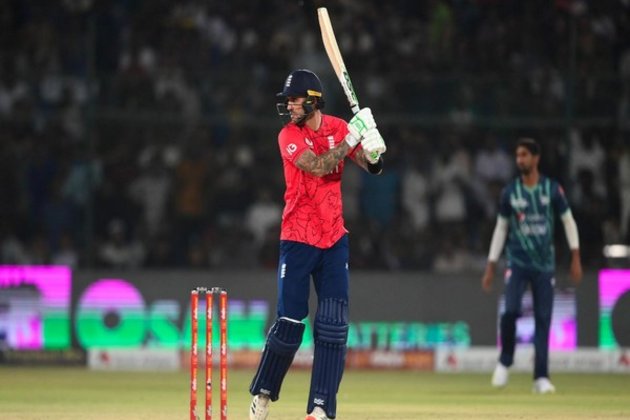 With this victory, England are 1-0 up in the series. In the first innings, Pakistan posted 158/7 in their 20 overs, with notable contributions coming from openers Mohammad Rizwan (68) and skipper Babar Azam (31). Luke Wood (3/24) impressed in his debut, not allowing the hosts to form big partnerships after the powerplay.

Chasing 159, Alex Hales (53) and youngster Harry Brook (42) played great knocks to take England across the finishing line and winning the game by six wickets. Spinner Usman Qadir (2/36) was the leading bowler for Pakistan.

Following this, Dawid Malan lended some support to Hales and both started to bring the run-chase on right track. At the end of powerplay in six overs, England were at 47/1 with Hales (14) and Malan (17). The 34-run stand between the duo was broken when spinner Qadir caught and bowled Malan for 20 off 21 balls, leaving England at 53/2.

Ben Duckett was the next batter in. He helped Malan in keeping the scoreboard ticking and they formed a 34-run stand too. Qadir got his second wicket, dismissing Duckett for 21 off 17 balls.

Following this, young Yorkshire batter Brook joined Hales. Brook was playing with complete freedom and finding gaps and boundaries at will. Hales also completed his half-century on his return to international cricket after 2019. The 55-run stand between the duo ended after Hales was dismissed for 53 off 40 balls with seven fours. Haris Rauf got Pakistan the wicket with his pace, but it was too late as Brook (42) and captain Moeen Ali (7) powered England to a six-wicket win, finishing the inning at 160/4 in 19.2 overs.

Qadir (2/36) was the most successful bowler for Pakistan. Dahani and Rauf got one wicket each.

Earlier, put to bat first by England, Pakistan got off to a fine start as openers Rizwan and Babar made the best use of powerplay, rotating strike easily and finding gaps for fours. At the end of six overs, Pakistan stood at 51/0, with Rizwan (28) and Azam (23). Spinner Adil Rashid dislodged Azam's stumps, sending him back for 31 off 24 balls and ending the 85-run partnership between the duo.

Rizwan brought up his half-century as well, but Haider Ali had fallen for just 11 to Sam Curran. After Moeen dismissed Rizwan for 68 off 46 balls, England started to choke Pakistani batter's run-flow with some tight bowling and brilliant fielding. Only Iftikhar Ahmed (28) could put on something decent on the scoreboard after the openers and Pakistan finished at 158/7 in their 20 overs. Shan Masood (7), Mohammad Nawaz (4) and Khushdil Shah (5) failed to make an impact with the bat.

Wood was the leading bowler for visitors with 3/24. Adil Rashid (2/27) also did well while Ali and Curran took one scalp each.

Wood was adjudged with the 'Man of the Match' award for his spell. (ANI)