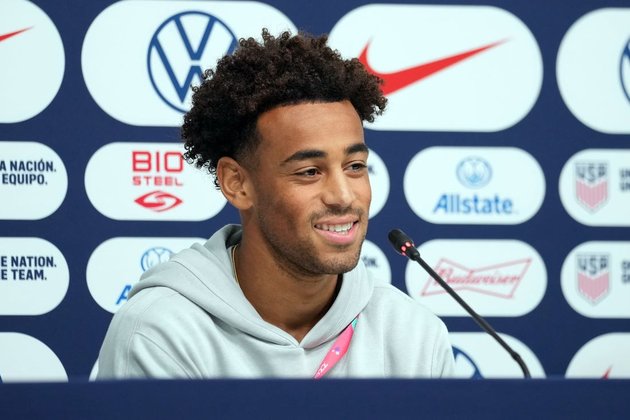 Midfielder Tyler Adams has been named captain of the U.S. Men's National Team for the World Cup in Qatar.

Adams, 23, will wear the armband when the U.S. opens play in Group B on Monday against Wales.

Adams, who plays professionally for the Premier League's Leeds United, has been the American captain for nine of his 32 previous caps. Seven of those games were during World Cup qualifying.

"We're proud to announce Tyler is the captain for the World Cup," USMNT coach Gregg Berhalter said Sunday. "We think he has great leadership capabilities, he leads by his actions and his words."

Adams is the youngest captain for the U.S. team at a World Cup since 22-year-old Harry Keough in 1950.

"It's a huge honor for me, obviously, to be named captain of this team," Adams said. "A very young team, but a lot of credit to my teammates because anyone throughout our leadership council can wear that arm band and represent us with pride and represent us in the right way."

Adams played for the U.S. at the U17 World Cup in 2017 and made his senior national team debut against Portugal later that year.

The Wappinger, N.Y., native spent his youth career in the New York Red Bulls academy. He recorded two goals and 11 assists in 52 MLS matches (49 starts) with the Red Bulls from 2016-18.

Adams played for RB Leipzig in the German Bundesliga from 2019-22 before joining Leeds United last July.

VIENNA, Austria: During a 24-hour strike by Austrian rail workers held this week over issues related to pay, rail traffic ...

STOCKHOLM, Sweden: Two Iranian-born Swedish brothers were put on trial this week after being charged with spying for Russia and ...

Italy to raise billions with windfall tax on energy companies

ROME, Italy: A draft of the government's 2023 budget seen by Reuters indicates that Italy plans to charge energy companies ...

Ireland to collect deposits on beverage bottles beginning in February

DUBLIN, Ireland: Details have been released by the government for a new deposit to be paid when purchasing drinks in ...

BERLIN, Germany: In an effort criticized by the conservative opposition, Germany's socially liberal government is moving ahead with plans to ...

Refiners have reportedly increased purchases as latest EU sanctions are about to kick inChina's oil refiners have started to snap ...

WASHINGTON, D.C.: According to a Pentagon report, if China continues with its current nuclear buildup pace, it could have a ...

William, Kate plan US trip in bid to tamp down royal controversies

LONDON, England: Prince William and his wife Kate, the new Prince and Princess of Wales, will travel to the U.S. ...

SYDNEY, Australia: For the first time in eight years, Australia lowered its terrorism threat level from "probable" to "possible," due ...

TRENTON, New Jersey: As part of a project to prevent major wildfires in a federally protected New Jersey forest, up ...

VIENNA, Austria: During a 24-hour strike by Austrian rail workers held this week over issues related to pay, rail traffic ...